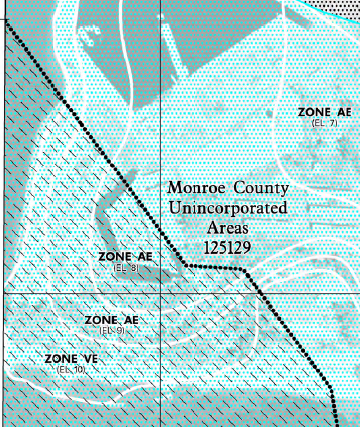 They are colloquially called COBRA zones. COBRA banned the sale of NFIP flood insurance for structures built or substantially improved on or after a specified date. For the initial COBRA designation, this date is October 1, 1983. For all subsequent designations, this date is the date the COBRA zone was identified. COBRA zones and their identification dates are shown on Flood Insurance Rate Maps (FIRMs).

Communities may permit development in these areas even though no Federal assistance is available, provided that the development meets NFIP requirements.

There is only one COBRA zone within the City of Key West. This zone, shown on the hatched area of the map excerpt, rests wholly over land owned by the State (Fort Zachary Taylor State Park) or the U.S. military. Military land is not within the jurisdiction of the City.