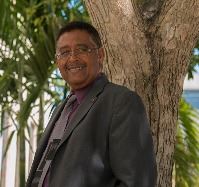 Clayton Lopez was born and raised in Key West. A fourth generation Key Wester, Clayton is the eldest of three boys and one girl born to Charles and Rose Lopez. Clayton’s parental grandfather, Roosevelt Sands, was a well known community leader and servant as well as Clayton’s closest mentor. Clayton was raised in the famous "garden of Roses" house, now located on Whitehead Street. He is a step-father to three boys, the father of one girl. He and his wife, Pam are proud grandparents to five girls and two boys.

He began his community service at the age of 13. That first community involvement was when he helped organize and participate in a march against a segregated skating rink here in Key West. At community action meetings in the seventies, Clayton’s was often the youngest voice heard in the room. By age 17, he was the youngest member of a team that helped secure funding to restore the Community Pool, now named after Dr. Martin Luther King Jr. He was still in High School when he received his first gubernatorial appointment.

Governor Ruben Askew appointed him to a committee of community leaders, students and educators that helped end the riots of 1972. The following year, he was chosen by the student body to continue in that capacity to prevent future occurrences. While majoring in Sociology at Florida Keys Community College, he helped found the first student short term loan fund.

The National Association for the Advancement of Colored People  (NAACP) Involvement

From there, his involvement included his membership in the NAACP: In the 1980’s he served as a youth advisor, and in the 1990’s he served as political action chair, and Health advisory committee. In the 1990’s, when some local ministers denied gay participation in the Christmas parade, he was one of several members, including his wife who marched in that same Christmas parade in protest.

Clayton is a man of faith, who believes in real family values, diversity and respect for those human differences that should be celebrated and learned from, rather than persecuted or exploited. He is an inclusive, self proclaimed man of the people, discounting nor disenfranchising anyone. He considers himself fiscally conservative and socially liberal.

Many awards recognizing Clayton’s continuing contributions to our community spanning several decades adorn the walls of his home and offices. He is currently employed by the Monroe County Health Department as a Human Immunodeficiency Virus (HIV) Prevention Training Consultant. He received the Lang B. Millian Community Service Award, the Martin Luther King Jr. Community Service Award. He is a three time recipient of the Celebrating Achievement and Pride Award from gay organizations citing him as a Community Friend. He has been honored by his community in receiving the Bahama Village Community Award for a lifetime of service.

I am proud of the service of my mother, grandfather, uncle and others in my family. I want my grandchildren to have that same pride in me. He truly believes in concepts of Do unto others as you would have them do unto you, and One Human Family. He has demonstrated these beliefs in the way he has led his life, and in the legacy he wants to leave. If asked, he says This is the legacy I was handed, it is the legacy I must pass on.