How You Can Help Hatchlings 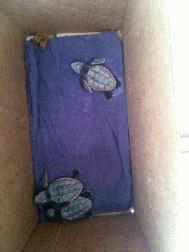 One warm August night, baby turtles hatched on Smather’s Beach. The plight of these hatchlings gave a graphic reminder that lights near the beach need to be turtle-safe or off during hatching season. Volunteers spotted about 50 tiny turtles in the bushes, facing the lights of the Sheraton on South Roosevelt Blvd. In addition, they found eight turtles in the road - three alive and five dead. The three tiny survivors are pictured. The volunteers went out the next night to release the survivors.

That night a second nest hatched and the volunteers were lucky enough to watch 101 turtles scamper to the water.

This is a perfect example of how vital it is to follow rules set by the Florida Fish and Wildlife Conservation Commission. The weekend hatching came from an unmarked nest; not all nests are accounted for. And that night’s hatching was two days earlier than anticipated. That’s why it’s vital for everyone to help in any way possible to help these wondrous creatures make it to the sea, where they can grow up to become part of this delicate, intricate ecosystem.

The Key West City Commission passed an ordinance aimed at protecting the island’s turtles, and city staff has come up with several suggestions over the years to comply with the law and assure a better survival rate: