New Flood Maps are Not in Effect.

FEMA has published preliminary flood, which are only proposed changes. The City, working closely with Fair Insurance Rates in Monroe (F.I.R.M.), has engaged professional engineers to analyze FEMA's work and has filed a community-wide appeal.

The City awaits FEMA's review of an appeal submitted during May, 2021. FEMA is under no specific timeline to respond to appeals. When the first correspondence occurs, it'll likely be a technical inquiry regarding the appeal data, followed by a further examination period of undetermined length.

Once FEMA has worked through all the appeals, it'll give the City a six-month letter advising when any new maps would go into effect. At this point, the best guess for new flood maps would be possibly late 2022. 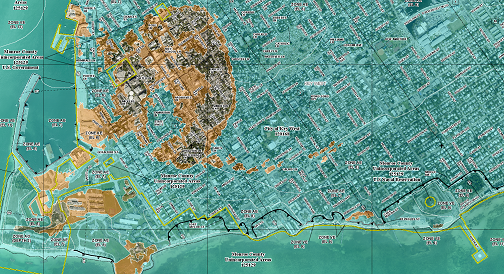 Structures removed from the X-zones (blue color) didn't previously have a flood level associated with them so this standard mapping difference wouldn’t be relevant.

The City awaits FEMA's review of an appeal submitted in May. FEMA is under no specific timeline to respond to appeals. When the first correspondence occurs, it'll likely be a technical inquiry regarding the appeal data, followed by a further examination period of unknown length.

Once FEMA has worked through all the appeals, it'll give the City a six-month letter advising when any new maps would go into effect. At this point, the best guess for new flood maps would be possibly late 2022.

The City - with the assistance of Fair Insurance Rates in Monroe (FIRM) has filed an appeal with FEMA objecting to its proposed new flood maps.  FEMA's appeal period ends June 17, 2021.

The 90-day appeal period began on March 19 and the City is preparing its appeal. FIRM's Flood Map Task Force has prepared a pre-recorded presentation summarizing its findings and the City's expected communitywide appeal.

How the City's appeal will affect any area or building within its boundaries can be examined using the online interactive Story maps.  (How these maps can be used in action is shown in greater detail during the pre-recorded presentation.)

FEMA is tentatively proposing to begin the 90-Day appeal period on March 18 and run through mid-June.  The City and FIRM await the consultant's overall assessment of FEMA's mapping efforts, to learn how comprehensive an appeal is warranted and what areas would be included in any appeals filed by the City. That information is expected during mid-February.

The City is anticipating receipt of a FEMA notice advising the beginning of its 90-day appeal period.

FIRM's (Fair Insurance Rates for Monroe) consults are finishing their independent analysis of FEMA's mapping on behalf of the City and are expected to have recommendations in late January or early February.

Our independent in-depth analysis is in the final stages. We've opted to include additional data, which will take a few more weeks to process.  Then we combine all our analyses to envision how it compares to what FEMA is proposing and our options.

Due to emergency conditions brought on by the pandemic, FEMA has suspended progress on remapping efforts, for an undetermined amount of time. The City has requested a minimum 18-month delay, but FEMA hasn’t yet responded to this request.

Monday, January 27th, 2020, from 4 to 7 pm will be the only opportunity in Key West for people to meet with FEMA to discuss how their property will be affected by the pending new flood maps. This won’t involve a presentation by FEMA, but will be more of a series of topic-specific stations to address your questions. City staff and officials will also be on-hand to answer questions, as will advocates from FIRM (Fair Insurance for Monroe).

This is an Americans with Disabilities Act (ADA) accessible facility with no appointment necessary. In the City Commission chambers. Please notify us in advance of any special accommodations that’ll be needed, such as translators or mobility concerns.

A second meeting occurred on Stock Island at Bernstein Park Community Room, Tuesday, January 28, 2020, from 9 am to Noon. City staff won’t be in attendance at the Stock Island meeting.

FEMA is scheduled to release its "Preliminary" flood maps on December 27, 2019. No major differences are expected from the "Draft" flood maps released during August. This will simply be a FEDEX parcel delivery along with a digital release on FEMA's Map Service Center.

Shortly thereafter, FEMA will mail a Summary of Map Actions (SOMA) listing which existing map corrections (LOMAs) might be retained and which will be extinguished. (Expect most of them to be rescinded. Several months are expected to pass between the City/FIRM and FEMA before the final flood maps become effective.

FEMA’s Open House for the public (no presentation by FEMA) is tentatively scheduled for January 27, 2020, from 4 to 7 p.m. in the City Commission Chambers at City Hall. Individuals will be directed to a circular series of topic-specific booths to discuss how the proposed flood maps will affect their properties.

A layer was added showing the new FEMA flood zone type; the "Coastal A" zone. This will be a regulatory boundary line. Buildings on the seaward side - or touched by - this line, will need to adhere to the higher VE-zone construction standards.

To better show the actual proposed difference in elevations - explained below in more detail - a "New Flood Level Impacts" layer has been added to this map. Each building in the City is color-coded to show the number of feet difference between current and proposed flood maps.

FEMA has released "preliminary" new flood maps. These maps aren’t yet in effect. The final flood maps wouldn’t likely become effective until the spring of 2021 at the earliest. In the meantime, City officials will be closely analyzing its options.

Structures removed from the X-zones didn’t previously have a flood level associated with them, so this mapping standard difference wouldn’t be relevant. To compare Elevation Certificate measurements, subtract -1.342-feet. All existing Elevation Certificates were measured to the old NGVD-29 datum.

FEMA hasn’t released the new flood maps. When it does, the final maps won’t become effective until 2020 to 2021. At some point during late August 2019, FEMA will be asking City staff to review drafts, and to look for obvious errors and omissions (City boundaries, street names, etc.). There may be some indication of what the future flood zones may look like, but that’s before the City examines and responds to what it sees in these drafts.

Months after the City has provided its initial response regarding these drafts, FEMA will schedule a public event to present the new maps and answer questions. Several months later, FEMA will issue a Letter of Final Determination. Six months from the date of that letter, the new flood maps will become effective.

The release of the Preliminary flood maps originally scheduled for late June didn’t occur. Presently, it’s not expected until about November 2019 and could be further delayed by City requests for time to analyze data requested but not yet provided by FEMA. The City will issue public notices well in advance of FEMA’s release of the new Preliminary Flood Maps, once the data becomes known. There will be ample notice provided before the new flood maps become effective, which isn’t likely prior to the summer of 2020. 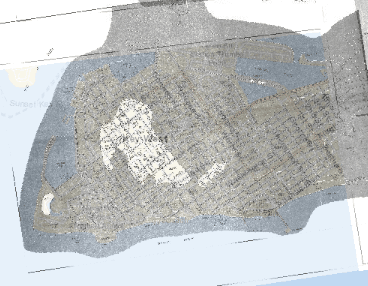 The City has revamped and enhanced the online availability and readability of its series of historic flood maps dating back to the early 1970s. Accessing these flood maps from the past will become more necessary as the release of new flood maps nears. Early indicators are to expect these new flood maps from late 2019 to early 2020. These future new maps remain as yet unseen by City staff.

However, it’s anticipated that a number of buildings presently not required to maintain flood insurance - currently located within an "X" type flood zone - may need to obtain flood insurance for the first time, as those "X" zones shrink. Today’s X-zones weren’t always drawn as they are today. Thus, minimum elevation requirements could have existed in years past, where none are in place now.

Property owners may need to demonstrate structures built after December 31, 1974, were constructed to the flood zones and elevations existing at the time. Using the City’s GIS website, the year of construction can be matched-up to the flood map in effect at the time (the most recent flood map dated prior to permitting for construction).

Watch the FEMA Update of a Pending New Flood Map. This was a two-hour presentation, but the heart of the latest information is mostly from 1:04 to 1:20. If you’re not familiar with floodplain transects, you might start at 0:59:30 minutes to gain a little more background information on this topic.